Posted on February 20, 2015 by One Billion Rising North Bay

A ({Vagina})Warrior is a vagina-friendly person of any gender identification who embodies the spirit of equality and empowerment, and assists in the battle to end violence against women. 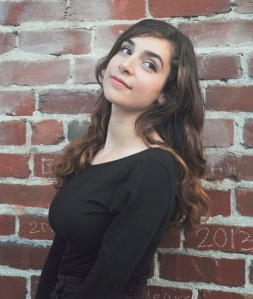 Each V-Season we select an individual in the community we feel represents the essence of this definition. This year we have chosen Casa Grande High School senior Sarah Soss.

Soss began volunteering for Guided To Safety in February 2014, accepting the role of Youth Advisory Chair.  In support of Guided To Safety’s mission, and as part of her “Project Serve”, Soss chose to raise awareness around Teen Dating Violence Awareness month, the month of February.

Soss wrote and distributed a press release to local

media regarding teen dating violence awareness and Respect Week, as well as organized a press release that was adopted by the Mayor Glass and Petaluma City Council and presented to her at a City Council meeting on February 2.

Soss was also instrumental in facilitating the first “Respect Week” (February 9-13) in Petaluma at Casa Grande High School, which included “Wear Orange” for respect day (February 10), a board in which students had an opportunity to express what “Love Is …” to them, distributed “LoveIsRespect” awareness wristbands and initiate a discussion on dating abuse with the feminist group, Eyes Open.  During their discussion, Eyes Open reflected on what goes on in our community, how it affects

young people and their parents today, and what the school could do to better promote awareness and prevention.

In addition, Soss is participating as a cast member of V-Day Petaluma’s production of “The Vagina Monologues”, a community campaign to raise awareness and end violence against women and girls.  Proceeds will benefit Guided To Safety.

Soss understands the importance of educating her peers in healthy vs unhealthy relationships. She feels that in order to prevent the abuse and violence, youth and adults must be educated.  She has also been an activist for women’s and LGBT rights, as well as healthy relationships. She has been a member of “Eyes Open”, a feminist group out of CGHS. As a member Soss participated in and lead discussions on feminism.

Soss has been a member of the Hapa Club, a school organization emphasizing the study of cultures, as well as the school’s theatre program.

As a CGHS Senior, Soss has applied to several State, UC, CSUs with a major in global affairs and cultures; if accepted to CSU Fullerton, however, her major will be psychology.

Thank you, Sarah Soss, for your efforts it making the world a better place!

About One Billion Rising North Bay